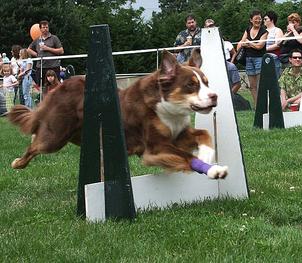 The Tale (Tail?) of BWild

My name is Tanya Johnson.  BWild became a registered kennel with ASCA in 2006 and is now considered Permanent.  I am an ASCA lifetime member, as is my Husband Tom. I am a member of the local club, ASCofWA and have been for many years and I have also served many positions on the Board for ASCofWA.  I spent 10 or so years on the ASCA DNA committee. I believe in breeding to the ASCA Breed Standard.  My goal for breeding is to produce versatile dogs as described in the ASCA breed standard, keeping working talent and bidability, but also focusing on temperament and Structure,
I would define versatile as:

With the ultimate goal of breeding healthy dogs with sound minds.

I have competition experience in Stockdog/Herding events, Conformation, Obedience and Flyball.
I have also taken years of Agility and Tracking classes, but never competed in those venues.  I find the study of canine behavior and training fascinating and have read many books on the subject to date.  Alas, there's only so much time  and money at the end of the day...

A little BWild history:
The first 'Aussie' I ever met was actually an Aussie/Heeler cross who tended more towards the Aussie type and character than the Heeler.  I guess I was about 9 years old.  Pebbles was my sister's neighbors dog.  Pebbles would come to my sisters house to visit (inside) every now and then and on such occasions she rarely left the front or back door, she was more than happy to be petted and scratched, but she knew she wasn't supposed to be in the house (according to her owners rules), and so when she felt she had been in the house long enough she would quietly stand and ask to be let out to go home.

In 1999 I met my "fated" Aussie. His name is Flea.  Flea was red merle.  From the moment I met Flea I noticed the amount of devotion that he held in his eyes, for a scratch, I'll do anything you ask.  That look is what hooked me on the Aussie.  From there I began to research more about the breed.

In the spring of 2000 I rescued my first Aussie, Fibi, from the local shelter and that is where it all really began.

I've fallen head over heels in love with the breed, I've met some truly amazing people, made some of the best friends of my life and I owe it all to the Australian Shepherd.

P.S. Just in case you we're wondering, because I know I am always curious how people come up with their kennel names...

BWild is short for Blue Wild.
Above all in honor of my first Aussie Fibi; often called "B" or "Wild Dog".
B also stands for Blue my favorite color.
Wild is also a fun reference to the "Wild West" where the Aussie originated from.

Funny though, for my dogs I prefer REDS! : )

I found this awhile back...
The perfect definition for "WILD":
Extravagant; fantastic: a wild idea.